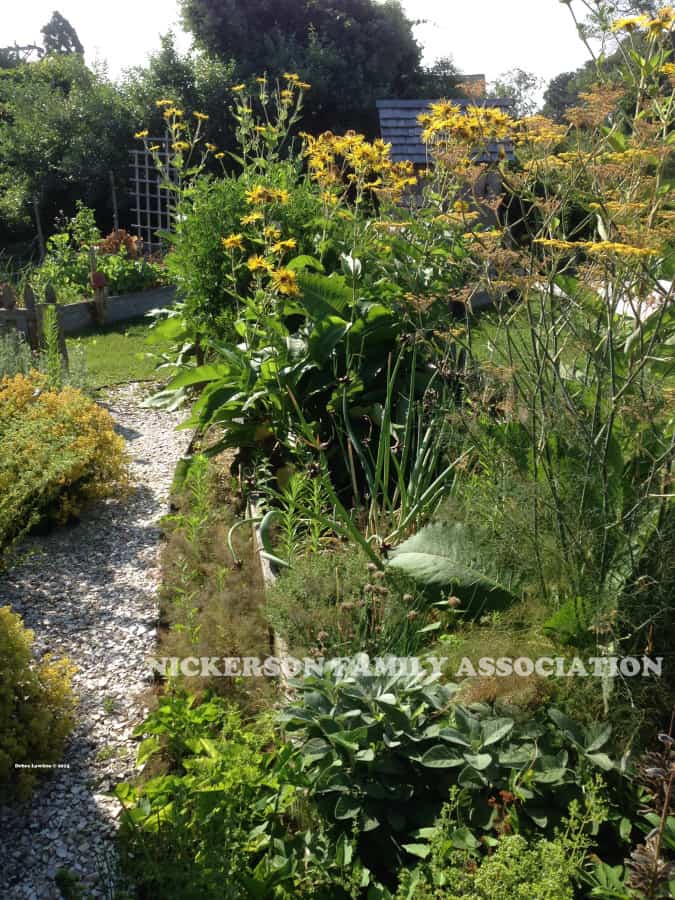 Taking a journey through the Nickerson Family Association Campus in Chatham Port is enhanced by one of those clear, beautiful days during which everything seems more intense, more vivid than normal in this golden light.

The Campus features the two NFA houses. One is the Genealogy Research Center. This house was a demonstration model at the Mid-Cape Home Centers, and was generously

donated to the NFA by Jan Nickerson in the late 1980s. The other house is the Caleb Nickerson Ho

use, a circa 1829 Cape that once belonged to Caleb Nickerson and his wife Priscilla Eldredge. It was floated here from across Chatham in 2004.

Yet on this sunny summer morning in August, it is easy to imagine Priscilla emerging from

the back door and heading into the gardens to tend her beans, squash and onions. As she returns to her kitchen perhaps she admires the area around the doorway which is fragrant with the aromas of fennel and other herbs planted there. The apples and peaches are basking in the sunshine. Most of the flowers are in bloom this morning, and their colors and scents are magnificent.

Also on the property is a stone that suggests the Native American Squanto is buried “within a gunshot” of here. Squanto was the Pilgrims’ guide famous for his ability to speak English. During the Pilgrims’ first winter and spring in Plymouth, he taught the newcomers to catch eels and to grow corn by fertilizing the poor soil with herring. In 1622, on a visit to Chatham, Squanto fell ill and died, hence the marker stone. No one really knows where Squanto was buried although plenty of people have an opinion. W. Sears Nickerson, who devoted much time to studying Native Americans in Chatham, believes Squanto is buried somewhere under the golf course at the nearby Eastward Ho! Golf club.

Next to the Squanto stone is another stone that says the site of the 1664 homestead of William and Anne Nickerson lies about 105 yards from the Caleb Nickerson house. Brian Nickerson and others pinpointed the site in 2006 using both historical information and GPS technology. When you visit the NFA Campus you can take a short walk along a path into the woods and see where the Father and Mother of Chatham built their homestead. It has a marker stone also.

On the way to the Nickerson homestead site is a windmill that is a scale replica of a 1681 windmill in Eastham and an outhouse currently under construction by Colonial carpenter Richard Noyes.

There is much more to see and do on the Campus, especially inside the houses, but we will journey there in my upcoming blogs.

Our journey this morning has provided an introduction to the

prominent physical features of the Campus; however, the NFA is much more than its Campus. It is populated by the Nickersons who are a welcoming group of knowledgeable folks eager to share the history of the Nickersons as well as of Chatham and all of Cape Cod.

You are welcome to drop by any Wednesday, 9 a.m. to 1 p.m. through September 23, and Ken Needham will give you a tour of the Caleb Nickerson House. You can also visit the heirloom gardens when the house is closed.

Click here to go to the membership page and become a member of the NFA and enjoy many more of the benefits of being a member. Remember: Just because your surname is not Nickerson, does not mean you aren’t one!

I joined the Nickersons in 2012 as the Association’s archivist, and you have just read my    inaugural blog. I plan to write about Colonial gardening and cooking, genealogy, Chatham’s history, William and Anne Nickerson and their descendants such as Caleb Nickerson. I welcome suggestions as to topics that interest you.