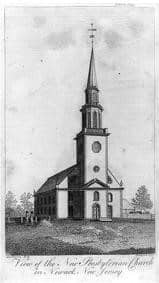 In our last blog, we left William and Anne, their four children, and Anne’s parents, Nicholas and Bridget Busby, each carrying a suitcase, aboard the John & Dorothy or the Rose with about 100 strangers.  They were embarking on a fascinating journey seeking to improve their lives.

We read that the “push – pull” factor was a strong motivator for our ancestors. They were pushed due to economic depression in England and the rest of Europe.  They were pulled by propaganda and tales of the gold and most importantly the land.

This was a high-risk journey to be sure, but the chance for improvement and their willingness to gamble, to literally bet their lives on the chance of being able to make a fresh start was compelling.  Those, like our ancestors, who were prepared to take the risks came.  And those who could not face those odds stayed home.

Another motivator for our ancestors to come to America was for religious freedom, to be able to practice their faith as they wished.

However, the desire for religious freedom did not necessarily mean the desire to have everybody share that freedom.  Our ancestors were Puritan Congregationalists and in Puritan Massachusetts, members of other faiths were not welcome.  In Anglican Virginia, it was virtually impossible up to the time of the Revolution for a minister other than Anglican to obtain a license to preach.  Maryland became a refuge for Catholics.

During this time of colonization England and the rest of Europe were in the throes of monumental religious controversies.  The religious tension was more than just Catholic and Protestant; Puritans, Presbyterians, Quakers, Methodists, Baptists and others all had their own particular forms of worship and systems of belief.  People who came to America in the 17th century were not seeking a land of religious freedom for all, so much as a land where they could practice their own form of religion free of interference from rival denominations.

One overriding theme of religion in colonial America was hatred of everything connected with the Roman Catholic church.  Thousands of people died in Great Britain in struggles between Catholics and Protestants, beginning with King Henry VIII’s replacement of Catholic Rome with his own Anglican structure. That religious tension was carried into the colonies, as much of British colonial policy was directed against Spain. 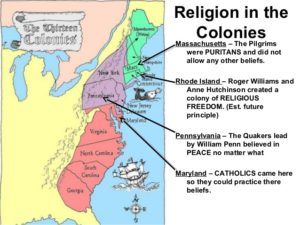 Massachusetts, begun at Boston in 1630, following a beachhead made a decade before by the “Pilgrims” at Plymouth, retained a deeply religious orientation through most of the colonial era. Its compact towns and villages were organized around largely autonomous “Congregational” churches; ministers played a key role in the local culture; and Protestant moral strictures framed many aspects of everyday life.

As we are aware, William founded the Congregational Church in Chatham around which grew the town of Chatham.

To help us further understand our ancestors journey we have to consider a more holistic context.  When I was in school (‘40’s and ‘50’s), I was taught Greco-Roman history, then European history, then American history.  Each of these historical periods was presented in a singular fashion without much information as to how each was connected to the other.

In the overarching perspective of history, the settlement of America came late in the process.  By the time the first English colony in North America was established in Jamestown in 1607, Spain and Portugal had colonized much of what we now call Latin America, and French and Dutch settlements were being established in the Caribbean area as well as in East Asia and elsewhere around the globe. The French and Dutch began colonizing North America as well, soon after Jamestown was settled.  By the time of the American Revolution, Great Britain possessed thirty-one colonies around the world, including some—Canada, Florida, and New Netherlands, for example—wrested from colonial competitors such as France, Spain and Holland.  Thus, the American colonies in 1776 were but thirteen small parts of a vast colonial empire that had been growing since the 1500’s, a century before America was colonized.

Indeed, I recently learned from the series by the BBC and Discovery Channel, called the South Pacific, Twenty Thousand Islands (2009), that most of those Islands had been colonized by the 12th Century!  Who did the colonizing?  The prevailing authoritative source states that it was the Malays who stand near the Sinitic People of Southeastern Asia.  There is archeological evidence that the Sinitic People colonized New Guinea approximately 60,000 years ago!

The Sinitic People launched many expeditions of exploration and colonization sailing eastward from New Guinea on their outrigger canoes holding three to four people.  Hence the reason that most of those twenty thousand islands had been colonized by the 12th Century.

If only the Europeans had talked to the Sinitic People, they would have learned that the world was round and not flat!

The point is that the entire world was being discovered and colonized long before America was colonized.  A point that escaped my teachers.  This thread of colonization stitches together a long history of diverse people driven by economic gain, religion and power.

The next time we will explore how our ancestors were able to navigate the wilderness that was America in 1637.

Please leave a comment below about this blog.  We’ll love to hear from you!