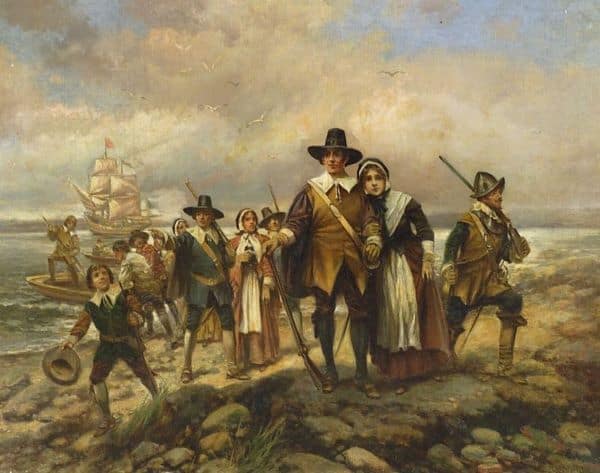 Finding Their Way in the New World

William and Anne Nickerson, and their party which included their four children, and Anne’s parents, Nicholas and Bridget Busby, finally arrived at their destination in the New World– Salem.

Their journey was rough and quite trying.  They tossed and rocked for weeks, as food spoiled, water became foul, and people got sick. 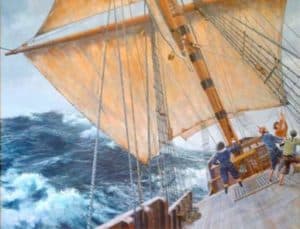 Perversely, the father/son captains of the John & Dorothy and Rose put them ashore on a deserted shoreline not unlike the present-day Curtis Point instead of Salem Harbor.  There was not much on those shores to greet them when they arrived.  It was just a rocky shore perhaps 10 meters wide and abutted the wild of the New World. 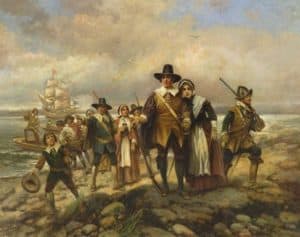 “Here’s another fine mess you’ve gotten us into Will,” Anne said. “I’ve never seen so many trees!  We’ve not ever had to deal with this before.  The ships have sailed off so we cannot go back!  How are we to find our way?”

What, you may ask, are they staring at?  The great forests of the New World are standing sentinel, guarding against these new invaders. 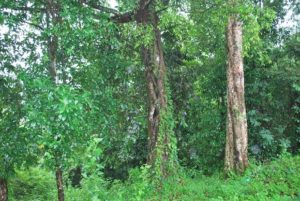 New World forest unlike anything in their memories of England.

“I say ole girl, this is a bit of a predicament,” Will replied.  “I do so wish we had GPS, but it hasn’t been invented yet!”  Will turned to his left and addressed the soldier and said, “You there, do you know the way?”

“I have no idea where we are!” the soldier said.

One way our ancestors had to tell directions

What a situation our ancestors faced.  How to find their way through this thick forest and across the land to a settlement called Salem.  No maps of this New World existed on such a small scale and no compass.  How will they navigate now that they are on their own?

“Will someone help us!” Anne cried.

From behind her, the familiar and reassuring voice of her father, Nicholas, answered, “Never fear Anne, I have a way to determine North from South and East from West!  On expedition in France I was taught a way to determine directions no matter where on earth one might be and I’ll show you now.”  Good old Dad comes through again.

Nicholas walked further onto shore. “The sun moves across the sky from east to west, so using a stick, a couple of rocks and some string I’ll find north, south, east and west!”

Will observed his father-in-law while thinking, “The old loon has finally gone batty.  How will a stick, rocks and a string help us?”

Nicholas, confident in his knowledge gained during his time as a dragoon, proceeded to demonstrate his technique which he called the “Shadow Tip Method.”

He made a small hole in the ground and stuck his stick into it in a very vertical position.  The stick’s shadow became immediately apparent.

He marked the tip with one rock.  Then he said, “Let’s all relax for about 15 minutes.” 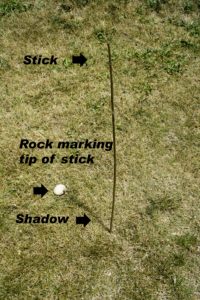 While this crowd of settlers stood around waiting they saw the shadow move several feet.

Nicholas then marked the tip of the stick with the second rock. 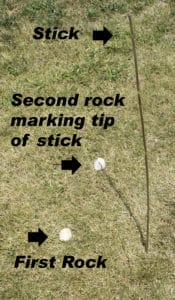 Then he laid a string between the pebbles. 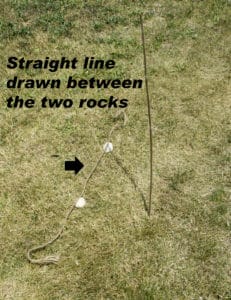 “Now I will stand with the first rock on my left and that will be west and the rock on my right will be east,” he said. “The direction I am facing is north, no matter where we are in the World.  Now Will, pick up your loom and let’s lead these people to the settlement!” 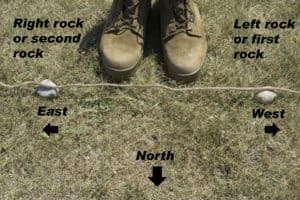 Nicholas and his military experience saved the day for our ancestors.  How else could our intrepid ancestors navigate, especially as they traveled from Salem for Plimouth, Yarmouth and then finally to Chatham, all of which lacked roads and road signs?   Just how many ways are there to navigate without our modern GPS or compasses?

Another way our ancestors found direction to their journey

Of course, at night they could always use the stars, provided it was not cloudy.

Because the North Star is known to stay fixed, it is always visible in a clear night sky (from the northern hemisphere) and is always pointing north, our ancestors used it for thousands of years as a guiding star both on land and sea.

Will remembered how the Captain of the Rose said he used the North Star at night when navigating the North Atlantic.  But wait a minute, how did the Captain find the North Star?  Of course, this was one of the basic skills all navigators knew and used on a regular basis; a skill whose use has lapsed since the invention of the compass.  But unlike the compass, the North Star always points to the TRUE NORTH.  There is no magnetic declination with which to deal.

“Thousands of years ago, when the pyramids were rising from the sands of ancient Egypt, the North Star was an inconspicuous star called Thuban in the constellation Draco the Dragon. Twelve thousand years from now, the blue-white star Vega in the constellation Lyra will be a much brighter North Star than our current Polaris. Hence, when talking about stars “moving” or staying “fixed,” remember they are all moving through the vastness of space. It’s just the relatively short time of a human lifespan that prevents us from seeing this grand motion.” *

One of the easiest ways to find Polaris is by using the group of stars known as the Big Dipper and/or the Little Dipper.

You, imagining yourself as Will, can go outside tonight and try to find one of them. 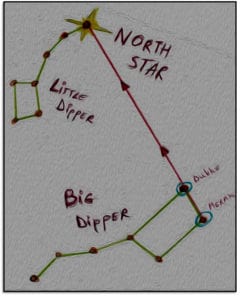 If you find the Big Dipper first, locate the two stars Dubhe and Merak in the outer part of the Big Dipper’s bowl (see picture). Simply draw an imaginary line from Merak through Dubhe, and go about 5 times this distance to find Polaris.

After you find the star, stretch your arms sideways while facing it:

Our ancestors found direction in daylight

If that is how people navigate at night, how did they navigate during the day? Will wondered. Perhaps the Captain let the sun guide him.

Will shared this with his father-in-law, Nicholas.  Drawing on his military experience, Nicholas said, “There are a few things to consider.  First, seasons can change the path of the sun.  During the summer, sunrise and sunset will be farther from the equator.  In the winter, it will tend to be closer to the equator. And finally, during spring and fall, the sun will rise and set in the most accurate east and west.” Nicholas paused and asked, “Will, did you know that the moon can also guide you at night?”

Yet another way our ancestors found direction

“I say ole boy, I am glad you are along!”  After a few moments of reflection, Will asked, “If the clouds are so thick we cannot see the sun or at night see the moon or stars, how do we find north?”

Moss giving direction to our ancestors

“That is a good question!  However, it is an easy one to answer.  These trees will give us the clue.”  Will as skeptical as ever said, “Now how can a tree tell us which way is north, and cheekily added, should we ask it?”

Nicholas, used to his son-in-law’s hardheadedness, replied, “No.  The trees are not very good conversationalists, Will.  However, what we can do is look for the moss growing on the tree.  Moss growth on a tree is generally on the north side, but can be on all sides.”

Will now confused, said, “If that is the case then how do we know which way is north?”

“Moss grows best in cool, damp, shady places.  Moss doesn’t grow very well in direct sunlight.  In fact, too much sun will retard its growth.  In the Northern Hemisphere, where we are now, the sun travels an arc across the sky that is not directly overhead.  Instead, its path is slightly south of overhead.  It varies a bit by season as well.  Therefore, we combine those two facts, we can reasonably draw the conclusion that the north side of a tree will receive less sunlight than the southern side and therefore, moss will only grow on that side.  Sound logic, so it seems. But wrong.

“There are more factors in play than just the ones we’ve considered.   Moss does indeed prefer shady places, however, there are many things that can create a shady environment for it.  Other trees, rock formations, and mounds of earth can all offer the shade that moss needs to thrive.  And all of those can cast shadows on the south side of a tree, not to mention the west or east sides as well.  In other words, moss can grow on any side of a tree.  All things being equal, it may be slightly more prevalent on the northern side, but that’s not enough to decide about our direction of travel. Why, just look at the moss on these trees!” 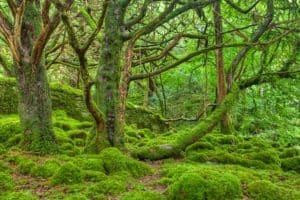 “Will, we can collaborate our initial estimate of north by using vegetation and moisture, that is by observing where plants are damper.  North- facing slopes receive less sun than south-facing slopes. The plants will therefore be cooler and damper on the north side.  In the summer, north-facing slopes retain patches of snow.  In the winter, plants on the south-facing slopes are the first to lose snow. The ground will also have a shallower depth of snow than its counterpart in the other direction.  Now do you understand, Will?”

Will thought a moment and said, “I guess so, but I sure hope there are no cloudy days ahead for us!”

Just then the group emerged from the deep forest into a clearing wherein they found the settlement called Salem.

Please leave a comment below about your reaction to the Fascinating Journey of our Ancestors.