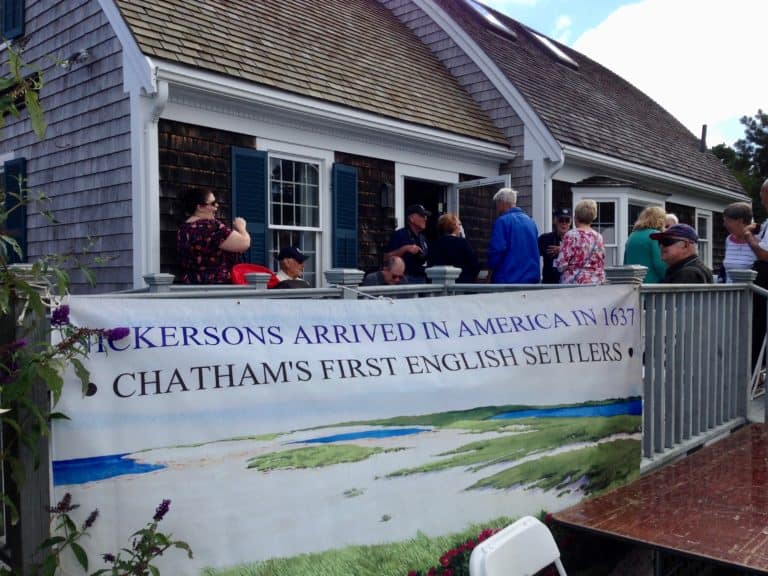 About 80 Nickersons flocked to Chatham during the weekend of Sept. 8 to celebrate three milestone anniversaries during the 120th annual reunion of the Nickerson Family Association, Inc.

At the same time, the Nickerson clan sent an archaeologist and crew into the tangled honeysuckle and grapevine behind the North Chatham property to continue searching for the location of the c. 1664 homestead of ancestors William and Anne (Busby) Nickerson.

“There are lots of tantalizing clues,” archaeologist Craig Chartier of the Plymouth Archaeological Rediscovery Project said on Sunday. That afternoon he made four additional significant finds: the heel of a 17th century pipe bowl, a fragment of English pottery dating to the 1670s, a metal fork dating to the 1740s and a 3000-year-old Native American spearhead.

It is now 380 years since the Nickerson family sailed from England to Salem. William and Anne were the parents of nine children, and are now the ancestors of hundreds of thousands. William and Anne relocated to what is now the Town of Chatham in about 1664. In 1897, 120 years ago, their descendants gathered in Chatham to celebrate their common forebears for the first time. Boston businessman William Emery Nickerson arranged that first reunion, and in so doing also launched the genealogical work that has occupied the NFA ever since.

Despite its enthusiastic group of “cousins,” the NFA didn’t always have a place to call home. In 1994 the group acquired its campus at 1107 Orleans Road in North Chatham and, in 1997, opened “the Nick House,” which serves as the group’s Genealogical Research Center.

Now, here’s the big wow: by coincidence, when the NFA was looking to buy land in Chatham, a parking lot for the now-defunct Christopher Ryder House Restaurant was for sale. It just so happened that this property and the contiguous land owned by the Chatham Conservation Foundation Inc. was the site of William and Anne Nickerson’s 1664 homestead.

“I can’t believe that we found this land that belonged to William and Anne Busby,” said Power, who brokered the land sale. She was addressing the assembled Nickersons who had just finished a picnic lunch under a tent on the NFA lawn. “It’s quite a story—we’re very proud of it.”

Ben Nickerson cut the ribbon 20 years ago. “I had the biggest pair of scissors that there ever was,” he said. “They were six feet.”

Jan Nickerson said his grandfather opened a lumber company in 1895 in Chatham. In 1958 the company, which had moved to Orleans, began building houses under the name Nickerson Homes. Eventually Nickerson donated the bow-roofed demo house to the NFA. The house was floated from Orleans to Ryder’s Cove and flat-bedded down the street. “It was a great pleasure to give the building,” he said.

Edmond Nickerson oversaw finishing the interior of the two-story building and the construction of an additional room. Barbara Nickerson headed up the gala 1997 reunion and celebration.

Meanwhile, from 9 a.m. to 4 p.m. on Sunday archaeologist Chartier and his crew dug multiple 15-inch deep test pits in the undeveloped area behind the property. Chartier began digging test pits in June 2016, and by noon Sunday he and his crew had examined the contents of the 13th test pit. So far they have found fragments of 17th century pottery from England and Germany, clay pipe stems, the remains of fish, chicken and animal bones, bricks from the hearth, hand-wrought nails and more. It is possible that William Nickerson ran a blacksmith shop repairing tools and pots for both his family and the Native Americans. The NFA is financing a formal week-long dig later this month.

“We’re sort of zeroing in on where the house could be,” Chartier told the group. “It’s just like a detective story, finding all the bits and pieces to solve the story.” By the end of the dig, Chartier hopes to determine what type of house the Nickersons built when they arrived as the first English settlers living among the Monomoyicks.

Earlier in the weekend the Nickersons pursued a full itinerary. Reunion-goers traveled from as far as Australia and as near as Chatham, and ranged in age from 94 years to six months. Friday evening the group enjoyed wine and hors d’oeuvres at the Atwood House Museum where they toured the Nickerson Camp, a dune shack built in 1947 on North Beach. Saturday morning the group assembled for its annual meeting at the Chatham Community Center and heard NFA genealogist Gail Blankenau of Lincoln, Neb., speak on dating and identifying 19th century family photographs.

After free time Saturday afternoon the group reassembled at the Captain’s Golf Course in Brewster for a buffet dinner followed by a talk “Close Encounters of the Ocean King” by John King II, a co-founder of the Atlantic White Shark Conservancy in Chatham. King is known for the spectacular photographs he takes while “swimming with the sharks” in specially-designed cages.