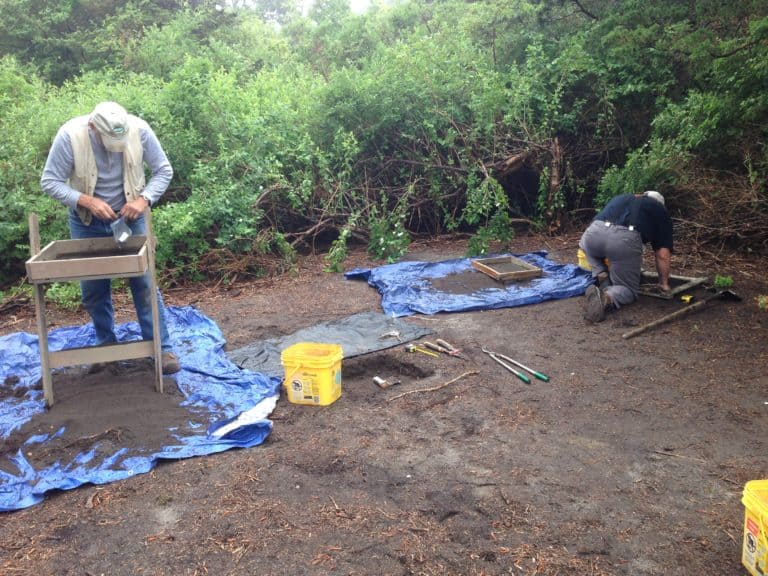 The Nickerson Family Association, Inc. is thrilled to announce it is sponsoring a five-day archaeological dig on the eve of Massachusetts Archaeology Month from Tues., Sept. 26 to Sat., Sept. 30 at its property in North Chatham.

Archaeologists hope to locate the remains of the c. 1664 homestead built by Chatham’s founders William and Anne (Busby) Nickerson. Because the site of the homestead straddles land owned by the NFA and land owned by the Chatham Conservation Foundation, the two nonprofits saw an exceptional opportunity to form a partnership for the dig.

Craig Chartier of the Plymouth Archaeological Rediscovery Project will lead a crew in searching for the homestead. Since June 2016 Chartier has dug nearly 20 test pits approximately 15 inches deep on the property. The crew found fragments of 17th century pottery from England and Germany, clay pipe stems, a 17th century fork, the remains of fish, chicken and animal bones, bricks from the hearth, hand-wrought nails and evidence of Native American habitation. It is possible that William Nickerson ran a blacksmith shop at the site repairing tools and pots for both his family and the neighboring Native Americans.

The Nickersons sailed from England to Salem in 1637. After living in the Boston area and in Yarmouth, in about 1664 William and Anne relocated to what is now the Town of Chatham. They were the first homesteaders from England to live among the Native Americans. Through the dig, Chartier hopes to solve the mystery of what type of house the Nickersons built, and to create a portrait of their everyday life. If William ran a blacksmith shop on the site, it will be the oldest such site ever found in the state and one of the few found in New England, Chartier said.