Dawn broke bright and clear in Salem the next day.  Everyone was joyous being in their new country.  They all conversed about the days that lay ahead and the adventures they would have traveling to other areas of Cape Cod.  Where to go and what to do, the opportunities seemed without bounds for our intrepid ancestors.

Yesterday they had retrieved all the bouncing hardtacks.  They would consume them later, perhaps as they journeyed to another town.

The hardtack offered a carbohydrate energy source, but what about protein?  During the warmer months they could hunt or trap for deer, bear, myriad smaller mammals and they could go fishing.  But if they journeyed to other towns which might take days, how would they carry or find an easy source of protein?  And what might they do over the long Cape Cod winters?   After all, one cannot live on hardtacks and dandelion salad forever you know.

They appealed to their new friends for advice and ideas.  These friends had the same issues upon their arrival and had turned to the Indians for advice.  The Petuxet tribe, which was Squanto’s tribe, advised that they make pemmican.  The North American Indians situated in the plains states invented pemmican and the recipe had passed for generations among tribes even traveling from the plains to the Eastern tribes.

Pemmican is a concentrated nutritionally complete food.  Pemmican was made during the summer months from dried lean buffalo meat and rendered fat to preserve and store the meat for use when traveling and as a primary food source during the lean winter months.

Typically, pemmican is a mixture of 50% shredded dehydrated lean meat and 50% rendered fat by weight.

The lean meat used in pemmican must be dehydrated at a temperature below 120° F.  A temperature between 100° F. and 115° F. is ideal.  Temperatures above 120° F. will “cook” the meat and will severely compromise the nutritional value of the pemmican.  Present day Federal and state laws require commercial dried meat products, e.g. jerky, to be raised to a temperature above 150° F. which cooks the meat to a well-done state and makes it totally unsuitable for making pemmican.

Authoritative sources state that the nutritional qualities of pemmican are unmatched when it is properly made.  It can be eaten for months or years as the only food and no nutritional deficiencies will develop.  No fruits, vegetables, grains, or dairy products are required to maintain perfect health, just properly made pemmican and drinking water.

For the best quality pemmican, use red meat, (deer, beef, elk, bison, etc.), and the rendered fat from these same animals. The animals should be grass fed or have eaten their natural diet in the wild.  In other words, NO grain fed animals.  DO NOT include nuts, seeds, vegetable products, vegetable oils, grains, beans, or dairy products of any kind.  A small amount of well dried berries (blueberries, Saskatoon, strawberries, etc.) is the only acceptable addition and should not exceed 5% by weight should you choose to include them; however, keep in mind that the berries will compromise the shelf life of the pemmican, making it much shorter.

Rendering fat is a simple process and most of us are familiar with it as it is one of the end results of frying bacon.  The process of frying the bacon releases the fat from the cellular structure of the meat and drives off the water.

The goal in this rendering process is a bit different from frying bacon in that it is the fat we wish to keep rather than the crisp “cracklings.”

The ultimate temperature of the fat should be kept as low as possible. Try to keep it below 250° F. with a final temperature of around 240° F. You gain nothing by raising the temperature any higher than 240- 250 other than more damage to the fatty acids which we want to avoid as much as possible.  In short, you need the temperature high  enough  to  boil  off  the  water  in  a reasonable length of time, but as low as practical to maintain the nutritional value and not denature the structure of the fatty acids any more than necessary.

The stove top method can be completed in about one hour and requires constant attention. The oven method takes 12 hours or more, but can be left unattended during the entire process.  Since our ancestors dealt primarily with a fireplace and/or a beehive oven, chances are that they used the oven method.  After all, this is an Indian recipe and they did not have iron or steel pots and their clay pots would only serve to absorb the fat.  Hence the oven method will be referred to here.

Cut the fat into small pieces about ½” square.  Put the fat in a good sized roasting pan and pop it in the oven set between 225° to 250° F and then go away for 12 to 24 hours. The oven thermostat will take care of the temperature for you.

Take a strainer and place it the container where you will store your rendered fat.  Line the strainer with a single layer of paper towel. This will filter out the sediment and just allow the liquid fat to drip through. 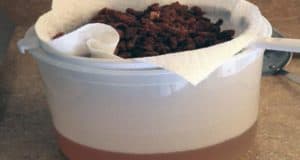 There is also a major difference in the fatty acid profile of grain-fed vs. grass-fed animals. The grass fed animal fat is between 25 and 50 percent healthy Omega 3 fatty acids.  The grain fed animal’s fat is only 2 to 3 percent Omega 3.  Omega 3 fatty acids are critical to the development and maintenance of our brain and nerve tissue.  Overall, the meat and fat from grass fed animals has far greater nutritional value than grain fed beef. Therefore, if you want to make pemmican that meets all nutritional requirements without the need for additional supplementation, both the lean meat and the fat should come from grass fed animals.

To make any useful amount of pemmican, a large quantity of well dehydrated lean meat is required.  You can use a dehydrator or set the oven to the lowest possible temperature (around 145 degrees) and put the strips of meat directly onto the rack.  Crack the oven door to prevent moisture buildup.  Let the meat dry out for about fifteen hours, or until it is crispy.

Generally, well dried meat will weigh just slightly less than 1/3 of its raw weight.  Therefore, 10 pounds of raw lean meat will yield about 3 lbs. of thoroughly dehydrated meat.  Since pemmican is 50% fat and 50% dried meat by weight, 3 pounds of dried meat will make 6 pounds of pemmican which will be equal to about 18 pounds of fresh meat.

Start with well dried red meat: beef, bison, deer, elk, etc.  Make sure that the strips of meat are thoroughly dry all the way through. Any observable moisture in the meat will provide an environment for mold and bacteria to grow.  Bend the strips of meat double, they should crack and not be rubbery. 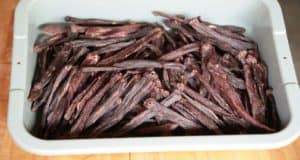 Traditionally the meat used for pemmican is dried without salt or any other seasoning. If you choose to season your meat go very lightly, less than half of what you would use for jerky. Use only dry spices like garlic powder, pepper, cumin, chili powder, and salt etc. 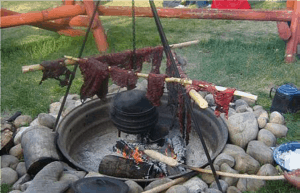 NEVER, make pemmican with meat that has been marinated in soy sauce, wine, or any marinade that contains sugar of any kind, and no vegetable oils of any type.

Grind the meat to a fibrous consistency like a fluffy, but slightly chunky mulch using a meat grinder.  Alternatively, shred the meat in a food processor using the steel blade, or in a blender.  When using these options, it will be helpful to chop the dried meat into smaller pieces. 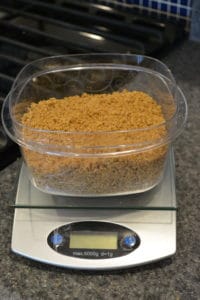 Weigh the amount of ground meat that you have and then weigh an equal amount of rendered fat.

Using a large Dutch oven or similar, melt the fat on low heat.  It will start to melt at about 120° F. 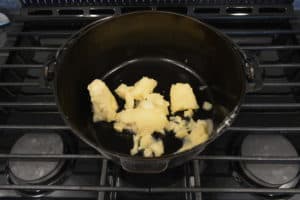 Try to keep the temperature of the fat below 150° F.  You spent time drying the lean meat at low temperature to maintain its nutritional value, so you do not want to deep fry it when you mix it with the fat. 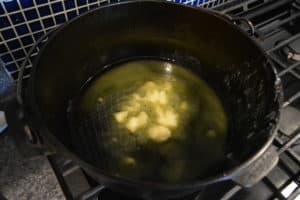 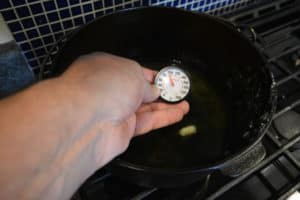 Mix the shredded meat into the melted fat and stir until well blended. 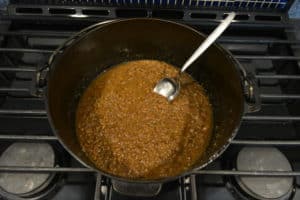 The completed mixture should look much like moist crumbled brownies. The mixture may look “wet” but most of the fat should be absorbed or coating the meat fibers – there should be little or no liquid fat pooling in the bottom of the pan.

Spoon the warm mixture into a mold of your choice, or into a Ziploc plastic bag and press flat, removing as much air as possible. 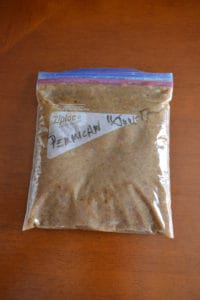 The grey colored molds above are mini loaf pans that are slightly larger than a cube of butter and hold about 150 grams (1000 total calories) of pemmican.  The Ziploc bags are sandwich sized and hold about 300 grams (2000 total calories).  When pressed flat they are about 5” x 6” x ½” thick.  Set aside to let cool and harden. The final product will be very hard, almost like a block of wax and will look a bit like dark oatmeal with some ground raisins stirred in.

If you are using molds such as cupcake tins or loaf pans as above, the pemmican can be removed from the mold once it is hardened and then stored in plastic bags or wrapped in a grease proof paper.  One convenient method to use is to press the mixture into lined cupcake pans and then store the resulting hockey pucks with their paper liners in gallon sized Ziploc plastic bags.  Each cupcake in a standard cupcake pan will hold about 75-80 grams (around 500 calories) if you pack them solid to the top.

If you want to keep your pemmican for any length of time, it should be stored in a dark place or wrapped in light tight paper or aluminum foil as well as placed in a plastic bag to keep out air and moisture. Pemmican does not require refrigeration and can be kept for years at room temperature as long as it is kept dry and shielded from light and direct heat.

How much pemmican did our ancestors eat?  Enough to make them full.  However, if you need a gauge as to how much you should eat, consider this:

Look for Part VIII in the next few days.  We will consider how our ancestors used fire, water and shelter to sustain them in this New World.