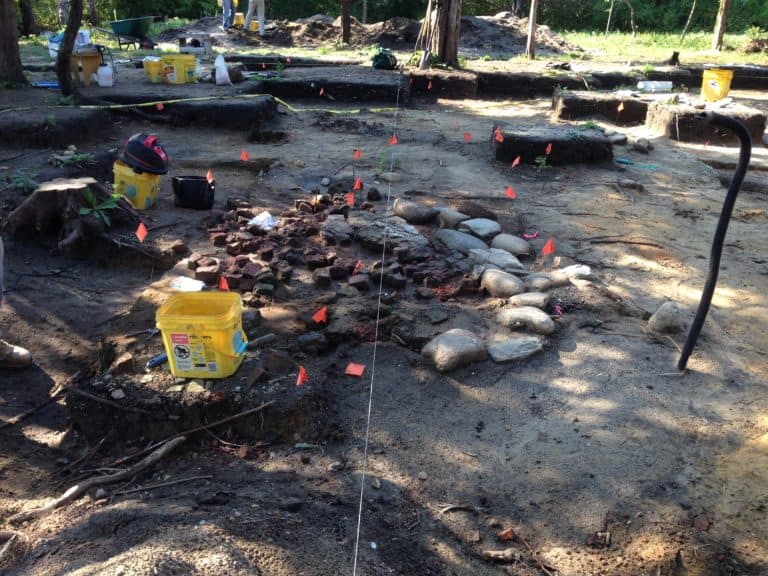 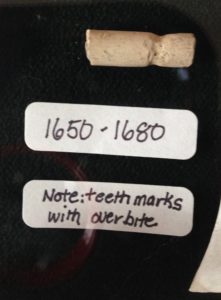 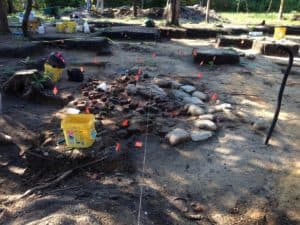 As the excavation of the c. 1664 homestead of William and Anne (Busby) Nickerson enters its third month, archaeologist Craig Chartier of the Plymouth Archaeological Rediscovery Project is calling the site “one of the best preserved, most informative 17thcentury sites in New England, especially on Cape Cod.”

One of the reasons the site is so important is that it had a relatively short occupation (20 or 30 years) by a small number of people. This means that all of the artifacts are associated with everyday life at the time that William and Anne lived there.

Already, during the first two hours of the dig on a Monday morning, a late 17thcentury William III half penny and a brass button have been found.

The Nickerson Family Association, Inc., which is sponsoring the dig behind its campus at 1107 Orleans Road, North Chatham, agreed to extend the dig by one month as the house is much larger than it was at first thought to be. The dig is financed by a $48,000 Community Preservation grant approved by Chatham voters in May and through donations from NFA members. The dig lies on land owned by the Chatham Conservation Foundation, Inc.

The house itself may have two chimneys, one at either end of the building, and this is again unique at that time in New England, Chartier says. Chartier had previously theorized that the homestead measured about 30-by-12 or -16 feet, much like the 1667 Jabez Howland House in Plymouth. William and Anne were, by 1664, empty nesters as their nine children were grown and on their own. But recent finds have made Chartier change his mind about the size of the house. “It just kept getting bigger and bigger and bigger,” he says. He now believes the house might be as large as 40-by-24 feet. Molten window glass, burned beans and other signs inside the house suggest that a fire overtook the house at some point.

One exciting find is traces of postholes that formed a palisade or wooden wall up to eight feet high. The Nickerson home may have been fortified.

“They were living out here in the 1670s, at the time of King Philip’s War,” Chartier says, adding that daily life for both Native Americans and settlers was at that time “terrifying.” Yet the palisade is “unprecedented in the architecture around here.”

The excavation began July 30. Significant finds include a bed warmer; the fragment of a sharpening wheel, a unique find in New England; a partial Jesuit ring which would have been used to trade with the Native Americans; a Trefid spoon handle; an intact spoon; an intact tobacco pipe; a round knife; a gray English gunflint; loads of Sgraffito pottery; an octagonal silver cufflink with the initial “R” and, last week, a “bale seal fragment” which would have been used when shipping items from England. A pipe stem had teeth marks suggesting its owner had an overbite!

Last September, during a one-week dig, Chartier’s crew discovered seventeenth century gunflint, a Native American spear point, English, German and Native American pottery fragments and window lead. The most significant find was the remains of the Nickersons’ hearth, proof that the homestead of Chatham’s founders was once located behind the NFA’s campus.

Historical records led current-day Nickersons to believe the remains of the homestead were hidden under the ground in an overgrown area behind the manicured campus. In July the area was cleared of invasive vines and brush to allow the dig.

William and Anne Nickerson were the first English settlers in what would be incorporated as the Town of Chatham in 1712. During the final three-month excavation Chartier hopes to answer remaining questions: What was the outline of the house? Did the house have a cellar? Where were the outbuildings for the animals? And did William Nickerson run a blacksmith forge on the property?

Weather permitting, the dig runs on weekdays from 9 a.m. to 4 p.m. through Sept. 28. The NFA is located at 1107 Orleans Road, North Chatham. Signs on the campus direct visitors to the dig site from the parking area. For more information email NFA Executive Director Debra Lawless at DebraNFA@outlook.com or call the NFA at 508-945-6086.