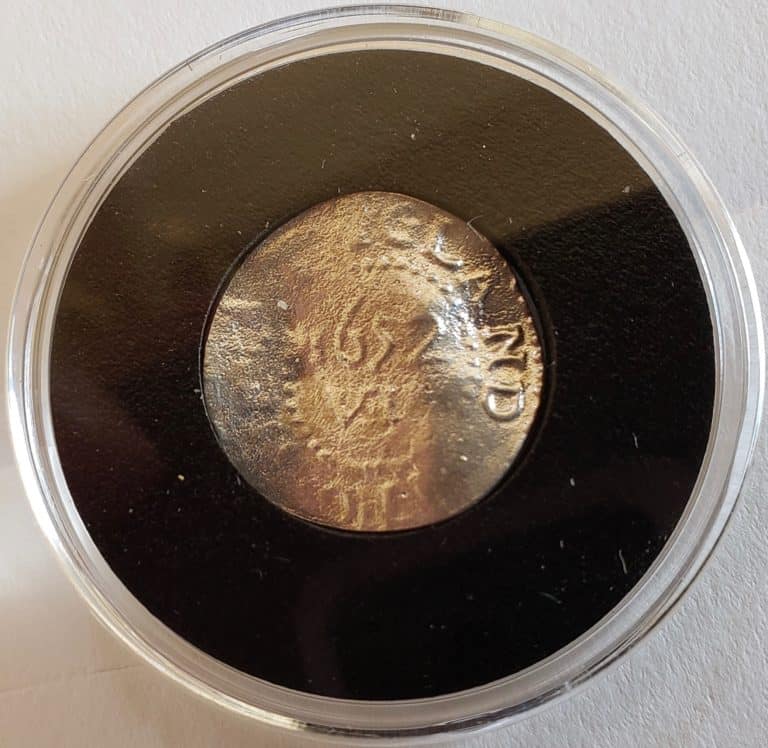 The Nickerson Family Association has traditionally understood that our Orleans Road property in North Chatham is at or very near to the actual homesite of our forefather ancestor William Nickerson, an immigrant arriving in the Massachusetts colony in 1637 from Norwich England. William Smith’s century old History of Chathamgives us compass bearings from structures then extant to the approximate location of that original house and homestead. NFA Past President Brian Nickerson took Smith’s co-ordinates to plot the likely site, which seemed just barely to rest on adjacent Chatham Conservation Foundation (CCF) land.

With the acquiescence and support of CCF, beginning in 2016 archaeologist Craig Chartier explored the suspected site, soon confirmed a 17thcentury occupation, and over three subsequent summers executed a thorough professional archeological dig. NFA supporters’ gifts and Chatham’s Community Preservation Act grants provided the funding for a complete excavation of the homesite and surrounds. Craig’s very interesting yearly excavation reports are linked at the NFA website and provide great insight into the life and capabilities of our immigrant forefather.

Of the many remarkable artifacts discovered in the extensive William Nickerson homesite excavation, the most interesting to me is a silver coin discovered by a rookie volunteer digger, retired Judge Gary Nickerson. On Sept. 17, 2018 he was working at excavating an area of a presumed wooden defensive palisade, between 12 and 16 inches below surface area, carefully removing the soil before processing it through a ¼ inch mesh shaker screen to separate artifacts from the dirt. As the soil fell away, a flat cylindrical object appeared, and Gary wondered how a washer had become buried so deep in the land. However, as he rubbed the object clean with his fingers, a VI appeared and a date – 1652! He had found a coin from William Nickerson’s time! Of course, excitement reigned. Pictures were texted to Craig, who was off site that day. He thought it a prank and instructed the crew to get back to work. But soon, with the coin in hand, it was seen to be a colonial Oak Tree type Massachusetts silver sixpence.

In the mid-17thcentury, England was in the midst of political turmoil. In 1649 King Charles I was beheaded, the monarchy abolished, and a Commonwealth was declared. Before the monarchy was re-established in 1660, Oliver Cromwell was Lord Protector for nearly a decade and supervision of the English colonies was lax. Trade suffered from the lack of coins to use as money. Shell wampum, grains, corn, fish and other goods had legislatively declared values, but most commercial exchanges were by means of barter. Consequently in 1652, without the sanction of Cromwell and the parliament, the Massachusetts House of Magistrates and House of Deputies approved the appointment of John Hull in Boston to mint silver coins to address the “occasion of much counterfeit coin” and “much loss accruing in that respect.” These first coins produced in our United States were sterling silver and in denominations of 3, 6, and 12 pence or 1 shilling.

All coins had an obverse with MASATHVSETS and a centered image of a tree, with a reverse of NEW ENGLAND AN DOM around the 1652 date and Roman numeral denomination. The Nickerson coin is an Oak Tree type, struck between 1660 and 1667, following the Willow Tree and preceding the Pine Tree types. Thus, we can determine without question that the homesite dates no earlier than 1660, and the wear on the coin suggests it being some years later.

Princeton University numismatist Alan Stahl, brother of CCF member Gerry Stahl, has examined the Nickerson silver sixpence and authored a scholarly essay on this and the other three smaller coins found in the dig. He believes it to be the only Massachusetts /New England Oak Tree type coin found on Cape Cod. It is also unusual in being only the sixth known example of a VI over XII overstrike. This means that the coin was struck from a cut down Shilling (XII pence) coin with sixpence (VI) dies. Traces of the shilling features can still be seen where they were not obliterated by the sixpence die. So, this is a quite rare and special coin.

The inspiration has arisen from the NFA Board that there would be interest among the membership, Chatham community and visitors in having a representation of this unique historical relic. The coin itself, by the agreement allowing the dig, belongs to CCF. They may decide to allow NFA to display it and other artifacts, to auction or sell it, or to do otherwise as they wish. However, they have graciously given permission for NFA to replicate, promote and sell copies of the coin.

The task of doing this has occupied over a year, but has now been accomplished. Some manufacturers were unwilling to take on such a process, fearing trouble for duplicating money and accusations of counterfeiting although the legal entity of the English Protectorate or Massachusetts General Court was centuries extinct. Eventually we found a supplier who understood that the law allows legal replicas if each coin is clearly marked as a copy. As we proceeded it was determined that fidelity of reproduction was quite difficult with casting or even high-quality photography. Eventually a high-resolution 3D scan process was utilized to provide an electronic exact representation for the production process and would generate a reproduction coin which could be inscribed on the rim as a copy.

So, we now have available for sale a replica which is just one step and 350 years from something that William or Anne Nickerson held in their hand. No doubt its original loss caused great consternation, as a sixpence was of great value at the time when hard money was scarce and difficult to come by. There may have been serious reproaches at its disappearance, as William in these years had been assessed several fines by the Plymouth Courts for various transgressions including the purchase from Massasoit and the Monomoyicks the tribal lands which became Chatham. To have this exceptional and rare relic reappear after 3 1/2 centuries in the hand of William Nickerson’s G-G-G-G-G-G-G-Grandson Judge Gary Nickerson is a coincidence almost too extraordinary to be believed.

Please consider buying one or more of these unique coins through our store https://nickersonassoc.com/store/Memorabilia-c13375177for yourself or as special gifts for your Nickerson family.