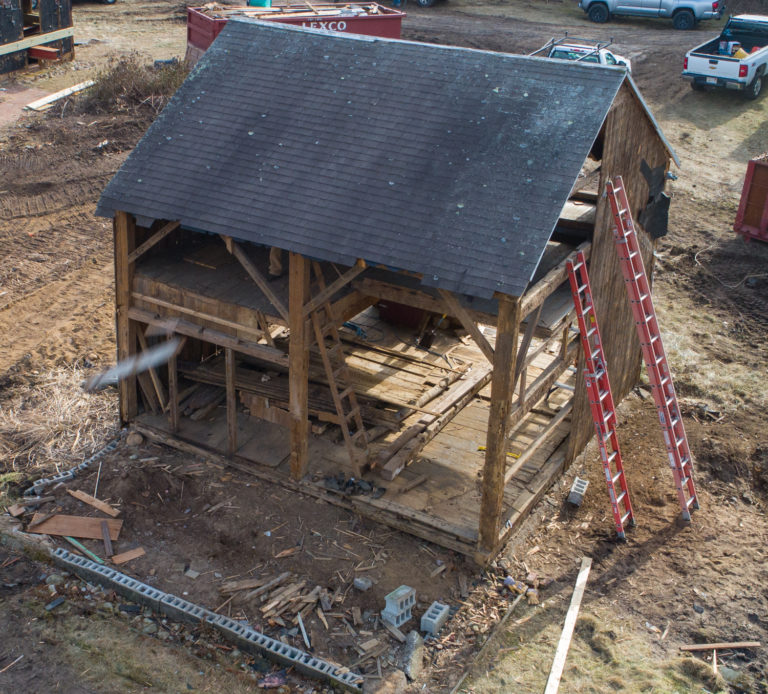 The 20-by-30-foot barn is one of the oldest, if not the oldest barn in Chatham. Instead of allowing the barn to be lost to demolition, we are working to rescue, relocate and rebuild the barn on the NFA campus, where it will be used to host gatherings, meetings and educational programs.

The lengthy process of dismantling (or flaking) an antique barn board by board and timber by timber, requires time and patience. All boards and timbers were labeled before storage. The careful removal of the siding usually occurs first, with each piece marked for placement during the reconstruction. Also, during the removal, each board’s condition was assessed. After the siding, the roof was removed. The shingles were discarded in this case since they are not original material. The decking and roof rafters may be saved for future use but are not original to the structure. A “map” of the building is normally made so the location of each piece of material can be documented. Photos will be used in conjunction with the effort. Prior to the timber frame being dismantled, all of the joints were also numbered. As with sheathing material, a “map” of the joints with numbers is created.

The flaking process is labor-intensive with machinery (cranes, scissor trucks and/or manlifts) used only to assist in this effort. Following the flaking, the timbers and sheathing were photographed, assessed and stored for reconstruction on the NFA property.

During the reconstruction of the barn, it is our intent to use only tools, wood and techniques that were available when the barn was originally built. Our goal is for the barn to be “built” in the 21stcentury as authentically as possible to replicate the original construction methods of the 1690s.

Any missing timbers will be replaced with fresh, hand-hewn timbers, sourced from Massachusetts forests. All new layouts will be done using the (British) scribe-rule method, as was used in late-1600s British carpentry. All repairs made to original timbers will be done by hand, with hand tools, saving as much of the original timber as possible. All repairs will be hidden, as much as can be accomplished, without losing the integrity of the timber.

The barn will then be rebuilt– raised a second time– on a new foundation. All the timbers and all the repairs will be visible. The old boards will be reattached to the walls of the timber frame. New boards will be used on the roof with new wood shingles.

Experts hired by the NFA dated the barn, which is an outbuilding to what may be the town’s oldest extant house. The connection to William Nickerson comes from William C. Smith’s History of Chatham, Mass. The barn, which is located in its original site in a flood zone, was not wanted by the new property owner who donated it to the NFA. The NFA has dismantled the barn, moved its timbers to our campus, and will restore it.

William’s son William was very much involved with the early governance of the town, serving as the first Town Clerk and Treasurer. He served as clerk for 15 years, treasurer for six years and selectman for six. William also served as a grand juryman, constable and inspector of whales. William purchased the land at Cotchpinicut Neck (Old Harbor) from three of the sachem Mattaquason’s grandsons. When William Nickerson went to the Plymouth Colony Court to secure title to the 4000 acres he had purchased from Mattaquason, he was given the right to purchase additional acres of adjacent land directly from the Monomoyick. William succeeded to those rights. He served in King Philip’s War, although the Cape Wampanoag did not join the other tribes in open hostilities.

UPDATE: We have applied for a $300,000 grant in the Community Preservation Act funds and on Feb. 25 the Community Preservation Committee endorsed our request. If all goes well with the next steps, voters at the Town Meeting in May will vote on the funds. Once funding and permitting is in place, we will host a “barn raising” and the antique barn will be rebuilt on a new foundation at the NFA campus.