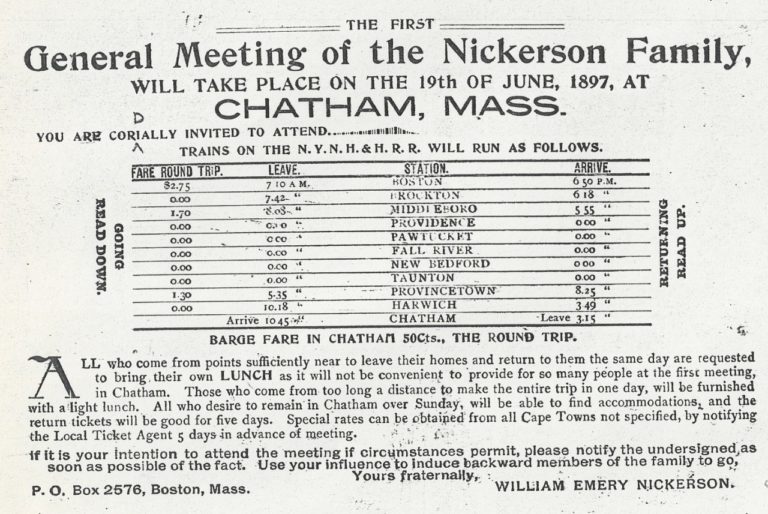 Please join us in celebrating the Nickerson Family Association’s 125thanniversary (1897-2022)!

In April 1897 William Emery Nickerson (WEN) of Boston mailed a circular inviting “the Nickerson clan” to a first-ever reunion on June 19. Response was enthusiastic and about 500 Nickersons descended on Chatham for the event.

In sending out his circular, WEN had several goals. One was to erect a memorial for “the family patriarch.” That goal would not be met until 1915 when a stone was placed in a small burying ground at the end of what is now A. Leonard Way, not far as the crow flies from William and Anne’s c. 1664 homestead off Orleans Road. Another was to collect and publish genealogical material. To that end, WEN printed 1500 genealogical blanks and distributed all but 60 by the time of the reunion. He calculated that the second printing would number 3000. WEN’s third goal was to create a permanent family association.

WEN, born in Provincetown in 1853, was on his father’s side a ninth-generation descendant of William Nickerson, and on his mother’s side traced his line back through Pvt. Solomon Covel of Eastham who fought in the American Revolution. He graduated from MIT in 1876 with a degree in chemistry. In 1901 he turned his skills to improving the new Gillette safety razor by creating a sharpening machine. Although it is frequently remarked that WEN did not have a head for business, he amassed a fortune through his work with King Gillette.

On the morning of Sat., June 19, Nickersons from as far away as Chicago stepped off the trains in Chatham. It was fortunate that the train spur had finally reached Chatham just ten years previously, in 1887, or the group would have had to travel by stagecoach from Harwich. Meanwhile, local Nickersons from all over Cape Cod poured into Chatham “by teams and barges.”

The Nickersons made their way to town hall, which was not far from the railway depot on Depot Street. Town hall “was soon crowded to the doors with more than 500 Nickersons of all ages and sizes,” the Boston Globe reported. A banner made from a large window shade hung in the back of the hall bearing what WEN wanted to become the family motto: “I desire to wrong no man, nor do I wish by any to be wronged.” The quote is attributed to William Nickerson, Chatham’s founder.

The program opened with the group singing “America.” They prayed, and listened to a historical address by WEN as well as six or eight five-minute speeches. WEN wrote a song for the occasion with the lyrics: “We’ll shout the name of Nickerson/Til earth and sky shall ring.” Luncheon consisted of a choice of a hot fish chowder or quahog chowder, bread and butter, doughnuts, tea and coffee for fifty cents a plate. This food was thought to suffice to “supply the ‘Inner Man,’” according to Osborn Nickerson, a selectman and the local coordinator.

The Boston Globe dubbed this a “Nickerson day in this Nickerson town.” The reunion also coincided, almost to the day, with the 260thanniversary of the Nickerson family’s arrival in Salem on the John and Dorothyor the Rose, two ships that sailed together from England. (In 2022 we are celebrating the 385thanniversary of the Nickersons on that ship.) At the end of the afternoon most Nickersons caught the train for Boston while a few dallied to enjoy “the natural beauties” of Chatham. Then, as now, June wasn’t quite “in season,” so reunion goers who wished to tour Chatham afterwards would not be tormented by summer crowds. Reunion goers would have been able to make the most of the daylight as the reunion was held just two days before the summer solstice—Chatham did not yet have electricity, and the nights were very dark.

This year we also celebrating the 25thanniversary of the Genealogical Research Center on the NFA campus. The first of our two buildings was dedicated in 1997. When we searched for a piece of real estate in the 1990s, serendipity brought us to purchase the very land where William and Anne had built their first homestead in 1664.