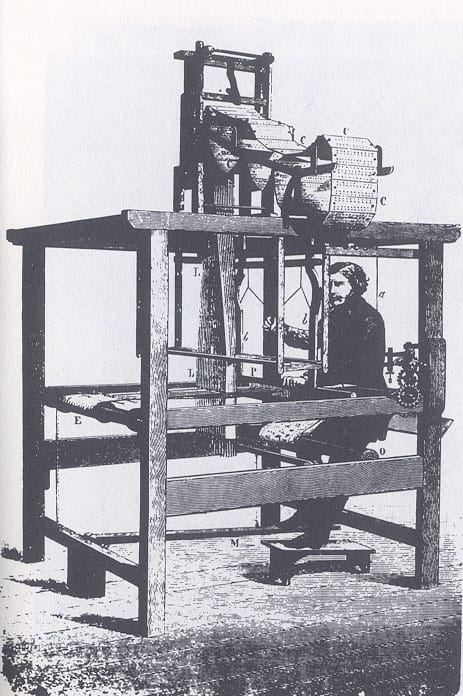 A direct path can be drawn from William Nickerson, the father of Chatham and a weaver by trade, to today’s computers.

An innovator is a role played by a small minority of people – only one person in 40 is of this type. They are the people most likely to conceive and develop new methodologies and technologies taking risks.  William1 was an innovator and risk taker.  It is apparent that William’s wife, Anne Busby Nickerson, was cut from the same bolt of cloth since she willingly took the same risk.

And yes, of course, William and Anne took a huge risk deciding to pack up their children and Anne’s parents to sail for the New World at a time when the New World was largely an unknown.  I will opine that this risk was a manifestation of the personalities of these two bold people.

Back in Norwich, England, William’s trade was weaving cloth for clothing, rugs and more on a loom.  After sailing to the New World, William was still a weaver.  However, he eventually turned to real estate development and became an owner and settler of a substantial tract of land purchased from the Monomoyick Indians thus becoming a risk taker in regard to the prevailing laws of the Plymouth Colony.  William developed Chatham, which in the middle 1600s was a difficult and important development occupying the Southeast corner of Cape Cod.

But let’s return to looms. Innovations in new loom technology started an evolutionary process that became the forerunner of today’s computers.

Change is a process, not an event!

What critical technological breakthrough connected this loom with this computer? 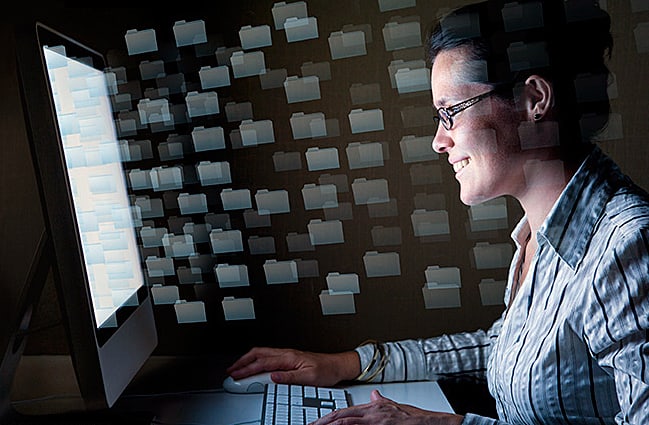 It turns out that beautiful looms like the one below, used to craft everything from clothing to rugs, have a unique and unexpected commonality with computers. 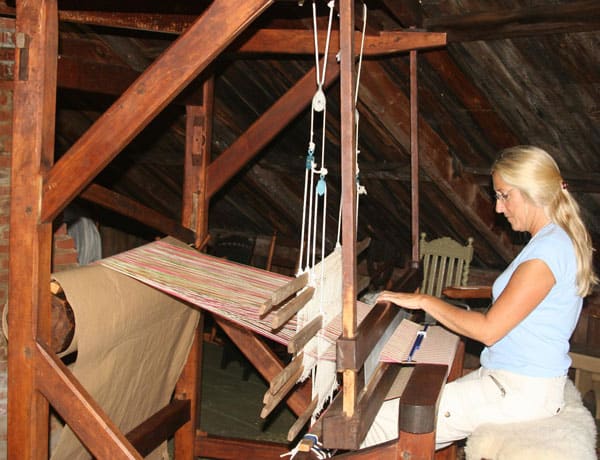 Weaver Michelle-Arsenault at the loom demonstrating the art of weaving at the Caleb Nickerson Homestead.

The breakthrough occurred at the point at which the loom took a big leap forward in 1801.

That’s when Joseph Marie Jacquard, another weaver by trade, innovated the idea of a punch card loom.  The punch card could be changed without changing the mechanical design of the loom. This was a landmark achievement in programmability. 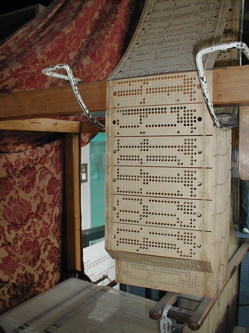 Punch cards being used at a Jacquard Loom 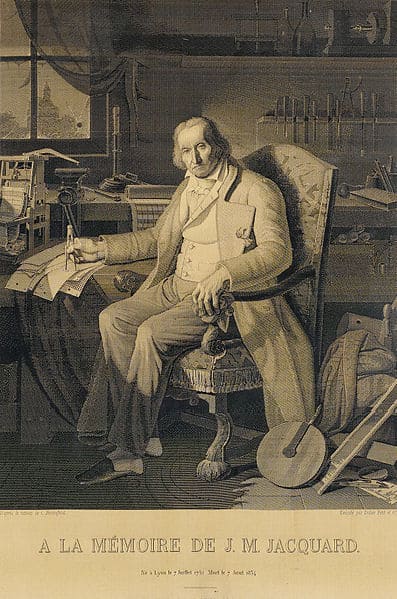 The above is a tapestry of Jacquard woven from silk. It took 24,000 punch cards to produce this design. It was done by request and only six are known to still exist.

The punch card is really simple.  As a concept, it is just a piece of stiff paper with holes punched into it, but whether there are holes or no holes is crucial to the function of the loom.  The cards are a set of

instructions for creating very complex designs.  When applied to the Jacquard loom, delicate strings interact with the holes or the lack of them to create remarkably intricate patterns.  Where there is no hole, the thread does not pass through and conversely where there is a hole the thread passes through.

Connecting the loom and the punch card as a predecessor to the computer is no exaggeration.  It is 100 percent an early form of computing.  It is similar to binary code in a computer program, so it is like a one or zero, either on or off.

So we have Jacquard, an innovative weaver, similar to William1, creating punch cards for a loom.  But who made the leap from applying punch cards to intricate patterns in cloth to using them to compute?

We have Charles Babbage to thank for that.  Babbage was an Englishman and he developed what is known as the first mechanical computer, called an analytical engine, in 1837.  When he saw Jacquard’s loom he was immediately inspired by it.  He thought about these punch cards and realized what a complex system they really were and he believed that they would be a great way to solve very complex problems.

The Brain Behind Computer Programming

Countess Ada Lovelace was friends with Babbage.  Ada showed remarkable talent in math, and at seventeen she was introduced to Babbage, who 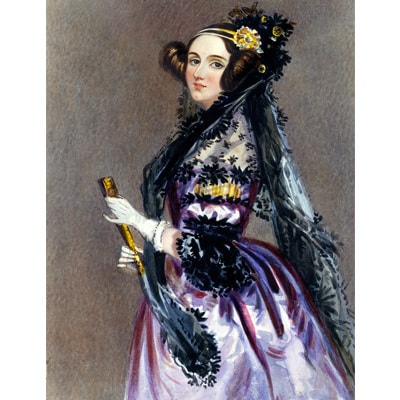 called her “the Enchantress of Numbers.”  Ada (1815-1852) was born Augusta Ada Byron, the only child of Annabella Milbanke and the British Romantic Poet, Lord Byron. (She became the Countess of Lovelace in 1838 when her husband was named the Earl of Lovelace.)  She made a beautiful analogy when she said that Babbage’s 1837 analytical engine could weave information and algebra problems in the same way that Jacquard’s loom could weave flowers and leaves on cloth.  It was Ada who really tied the loom and punch cards together with solving problems.

Byron is a hero among Greeks, having volunteered in that country’s war of independence against the Ottoman Empire in the 1820s.  Two decades later, Byron’s daughter would become a hero among geeks, having drafted what is today considered the very first computer program.

Her feat is all the more impressive considering that, in the 1840s, there weren’t actually any computers.  Back then, the word “computer,” which first appears in English in the early 1600s, meant a person whose job it was to perform calculations.

The design of the Analytical Engine is nothing like that of today’s MacBook, but it has all the basic architecture.  It distinguished between program memory and data memory.  It had a separate input/output unit.  It accepted conditional “if/then” expressions.

The Analytical Engine was a lifelong passion for Babbage; he tinkered with designs until the end of his life, in 1871.  But it took a young mathematician with a storied family history to grasp the full potential of Babbage’s machine.

Ada corresponded with Babbage about his Difference and Analytical engines, and, in 1842 and 1843, she translated an essay about the Analytical Engine by the Italian statesman and mathematician Luigi Menabrea.

Ada’s notes on Menabrea’s essay, which explain what the Analytical Engine is and why it is important, are longer than the actual essay itself.  “Note G” describes, in detailed steps, how one could use punch cards to make Babbage’s engine calculate a sequence of Bernoulli numbers.  Historians of science regard “Note G” as containing the very first computer program, making Ada the first programmer.

Perhaps more importantly, the article contained statements by Ada that from a modern perspective are visionary.  She speculated that the Engine “might act upon other things besides number…  the Engine might compose elaborate and scientific pieces of music of any degree of complexity or extent.”  The idea of a machine that could manipulate symbols in accordance with rules and that number could represent entities other than quantity mark the fundamental transition from calculation to computation.   Ada was the first to explicitly articulate this notion and in this she appears to have seen further than Babbage.  She has been referred to as a “prophet of the computer age.”  Certainly, she was the first to express the potential for computers outside mathematics.  In this the tribute to her is well-founded.

But equally important was Ada’s recognition of what the Analytical Engine really was: not a mere steampunk abacus, but a device that can process data of any kind, and perhaps even reason.

Change and innovation are a process and not an event.  In the above we come to understand how a loom used by innovative people like William Nickerson1 to earn a living led humanity to the now ubiquitous computer.