Nobska Point Light sits on the most southwesterly point on Cape Cod.  It is the only publicly-accessible lighthouse on the Cape west of Chatham.   At least three Nickersons have played a role in the existence of the lighthouse.   I am the most recent.

In early 2014, the Coast Guard made it known that it wanted to “excess” the Nobska Point Light property to another public or non-profit organization to restore and preserve the property.  The Coast Guard would retain the light and foghorn to continue as navigation aids.  The Coast Guard’s reasons for this were simple– eliminate costs while still continuing the mission.  The “have your cake and eat it too” metaphor comes to mind.  Also, the organization that picks up the Coast Guard’s expenses can neither have anyone live on the property nor charge any fees for its use.  What fool would accept a deal like this?  As it turns out, I was that fool along with about 30,000 others in the Town of Falmouth.

You see, Nobska Point Light is the most important icon of Falmouth.  It certainly isn’t the oldest structure.  It never had a historically-important person live there.  Architecturally, both the lighthouse tower and its keeper’s house are cookie-cutter standard designs right out of the Coast Guard catalog of the 19th century.  Never mind all that.  It belongs to us all and we love it. 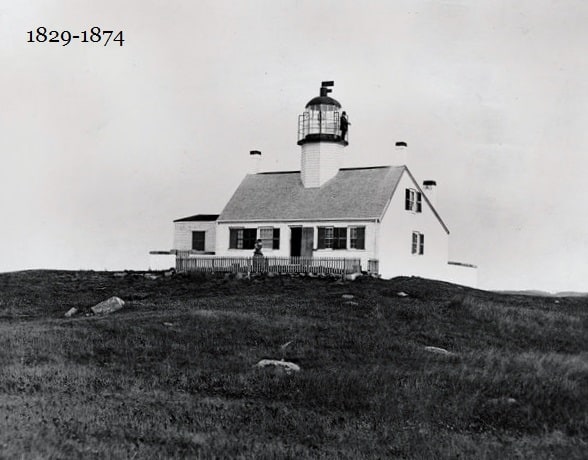 Starting in early 2014, I was part of a group working with the town and four other non-profit Falmouth organizations trying to figure out how to bring the property under local control.  A lot of work culminated in the Coast Guard handing control over to the town and the town handing it over to the Friends of Nobska Light, Inc., of which I am the president.

But let’s go back to the beginning.  Martha’s Vineyard Sound was a very busy sea passage in the early 19th century.  The War of 1812 was over and commerce in the new nation was in an upswing.  Nantucket was the center of the universe for whaling and its product was in great demand by the nascent industrial revolution on both sides of the Atlantic.  While merchant shipping grew, navigation aids became critical for commerce.  About the same time many other lighthouses were being sited, Massachusetts passed legislation on June 12, 1828 allowing the federal government to site lighthouses along its shores.  In 1828, William & Hannah Lawrence, Elizabeth Lawrence and Andrew Davis sold four acres at “Nobsque” to the president of the United States for the construction of a lighthouse.  By 1829, the new lighthouse was in operation, a single Cape Cod-style house with the lighthouse tower rising up from the ridge of the roofline.

Eight years after the light started construction, Oliver Arey Nickerson was born in Chatham.  (Oliver8, Oliver7, Ebenezer6, Stephen5, William4–3–2–1.) Today, he would have “Junior” after his name because his father’s name was the same.  In his twenties, he went to sea.  In 1859 he was on the schooner Fillmore and in port at Gabarus, Nova Scotia on Cape Breton Island.  While in town with some of his shipmates, one of his shipmates died, and Oliver was implicated in his death.  The report of the incident in NFA’s files notes considerable confusion, as it seems everyone involved was drunk.  There appears to have been some pushing and shoving with one of the men falling into one of the ship’s small boats and then falling out of the boat and drowning.  Oliver was acquitted of any wrongdoing by the courts in Canada.  It appears that U.S.  courts also got involved somehow, but no report on what might have occurred can be found.

The next time we hear about Oliver is 1874, when he became the lighthouse keeper at Nobska.  In 1857 he had married Mary Elizabeth Nickerson, daughter of Isaiah Nickerson of Chatham.  (Mary Elizabeth9, Isaiah8, Absolom7, Ensign6, Absolom5, William4–3–2–1.) When Oliver and Mary moved into the Nobska lighthouse property, the building was 46 years old.  Bearing the brunt of winds and weather on this unprotected promontory, the structure had aged significantly.  The tower/roof system was starting to fail and water infiltration made it worse. 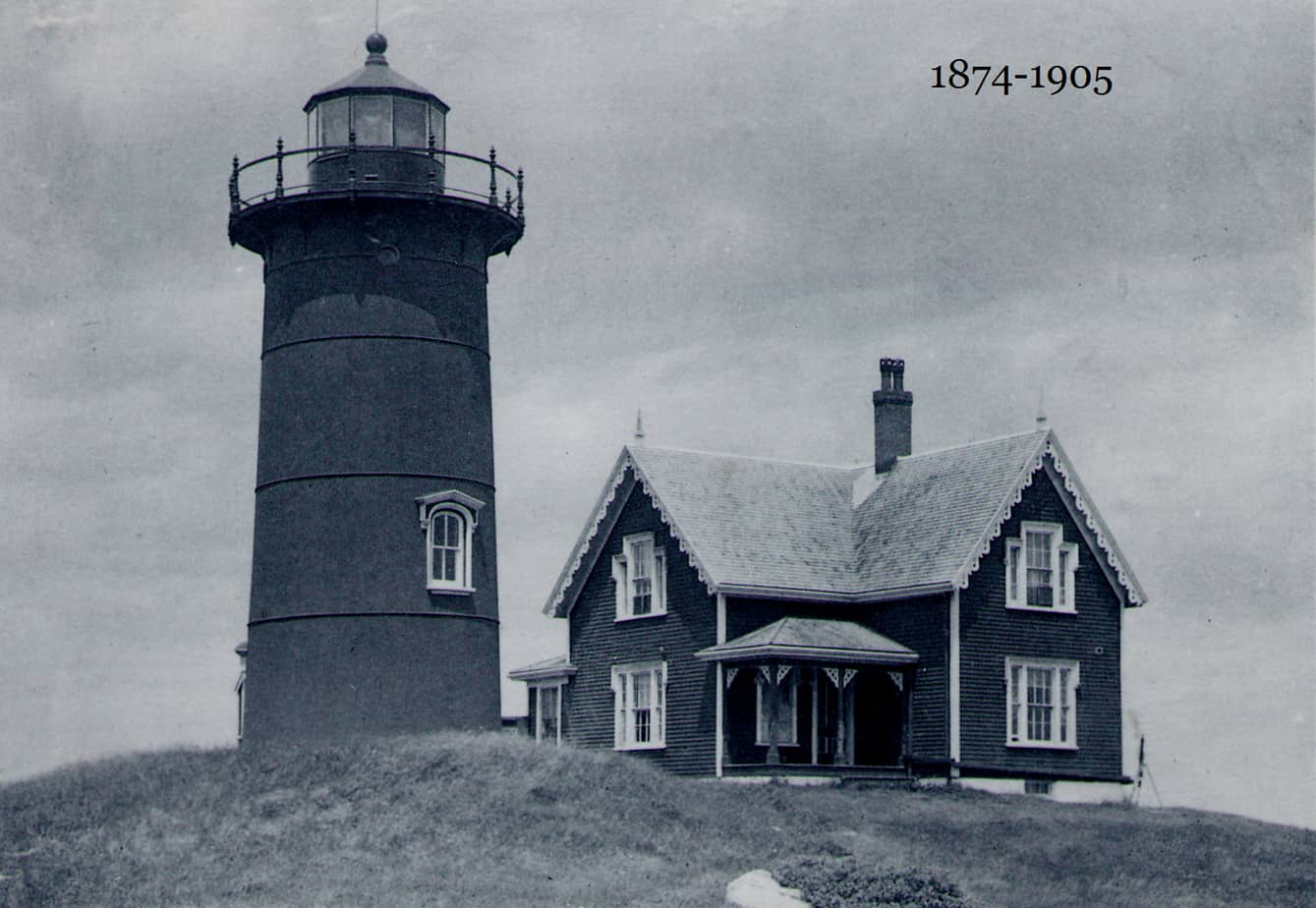 Oliver and Mary may have been the protagonists of the plan to replace the structure that came to fruition two years later in 1876.  That year, a new cast iron, brick-lined tower was erected along with a separate keeper’s house a few steps away from the door to the lighthouse tower.  The two-story house had six rooms plus an attached shed.  The old structure was demolished and they moved into their brand-new house.

When they moved to Nobska in 1874, whale oil and kerosene fueled the light.  We know that a Fresnel lens was used in the original tower and we presume that lens was moved to the new one.  In 1888, though, Oliver installed a new ¾ fourth order Fresnel lens into the tower.  That lens continues to this day at Nobska Point Light.  In 1919, Nobska Point Light was electrified. 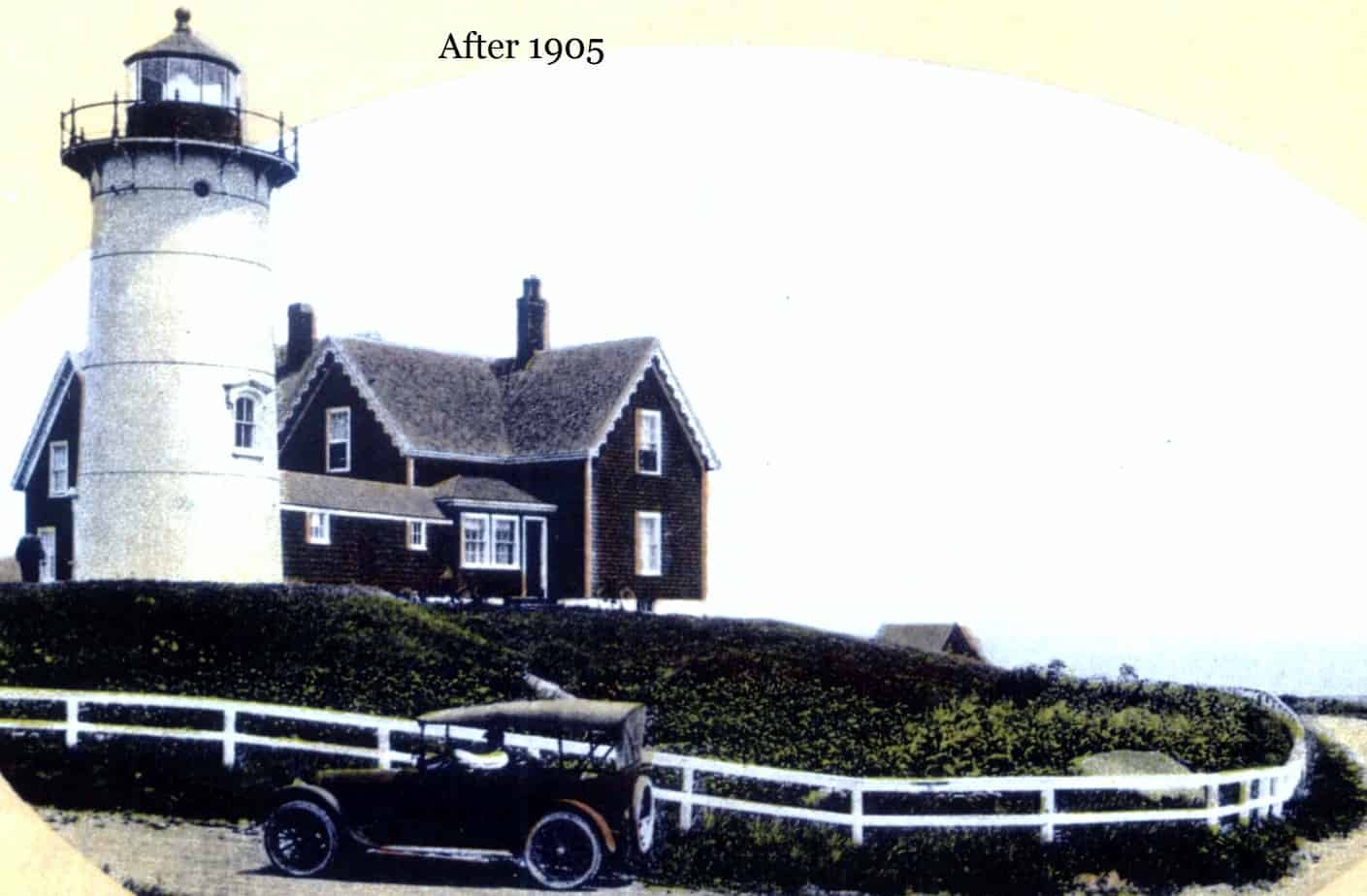 Later in Oliver’s life, it is understood that his daughter Florence Imogene Nickerson performed the duties of lightkeeper as her father was not physically able to do all.  Oliver was the longest serving lightkeeper at Nobska, from 1874 until his death in 1911.  Mary Elizabeth continued to live in Falmouth until her death in 1915.  They are buried a few hundred yards down the road at the Woods Hole Village Cemetery next to the Church of the Messiah.

John Edward Nickerson never lived at Nobska, but he may be the single-most important person in the history and future of Nobska Point Light.  John Edward, who was known in Falmouth as Edward or J.  Edward, was born in Falmouth in 1890.  (John Edward9, Judah Sears8, Ezekial7, Lindsay6, Benjamin5–4, Samuel3–2, William1.) He was part of the family of Nickersons who lived on Gifford Street in Falmouth, right around the corner from where I live now.  The Nickersons owned a hardware and plumbing store on Main Street in Falmouth for many decades in the late nineteenth and early twentieth centuries.  He served on the Falmouth Board of Selectmen for 25 years, many of those serving as Chairman.  When he registered for the draft in 1942, he listed his employment as Selectman.

But it was in 1962 that he played the important role of preserving Nobska.  There is a relatively long history of the Coast Guard being negligent about the Nobska Point site.  In the late 1930s and up to the 1950s, the southeastern coast of Massachusetts was hit by a number of hurricanes.  Those and natural erosion had brought steep bluffs falling to the ocean below right up to the edge of the road in front of the lighthouse.  The Coast Guard decided to not take any action on this.

Because the road was an important connector between the villages of Falmouth and Woods Hole, the town and the state took notice.  Under the leadership of John Edward Nickerson as Chairman of the Board of Selectmen, they combined forces and funded a coastal “armoring” project to protect the road and the lighthouse property.   Fill was brought in to bring the bluff away from the road and large granite slabs and boulders provided armoring for the new shoreline.  More than 50 years later, that 1962 armoring is still in place and still performing the purpose for which it was designed.

The future is now very bright (excuse the pun) for Nobska Point Light.  Funding is being assembled and architectural plans are being developed for a renewed Nobska Point Light that will become more of a public attraction for the region than ever before.  The property will become an addition to Falmouth’s parks and recreation properties.   On the cultural side, not only will the historic buildings be restored and preserved, but also a new museum of the region’s maritime history will be created in the two keepers’ houses.  The Friends of Nobska Light is in its first year of the five-year plan with elements of the improvements to be rolled out in phases between now and 2021. 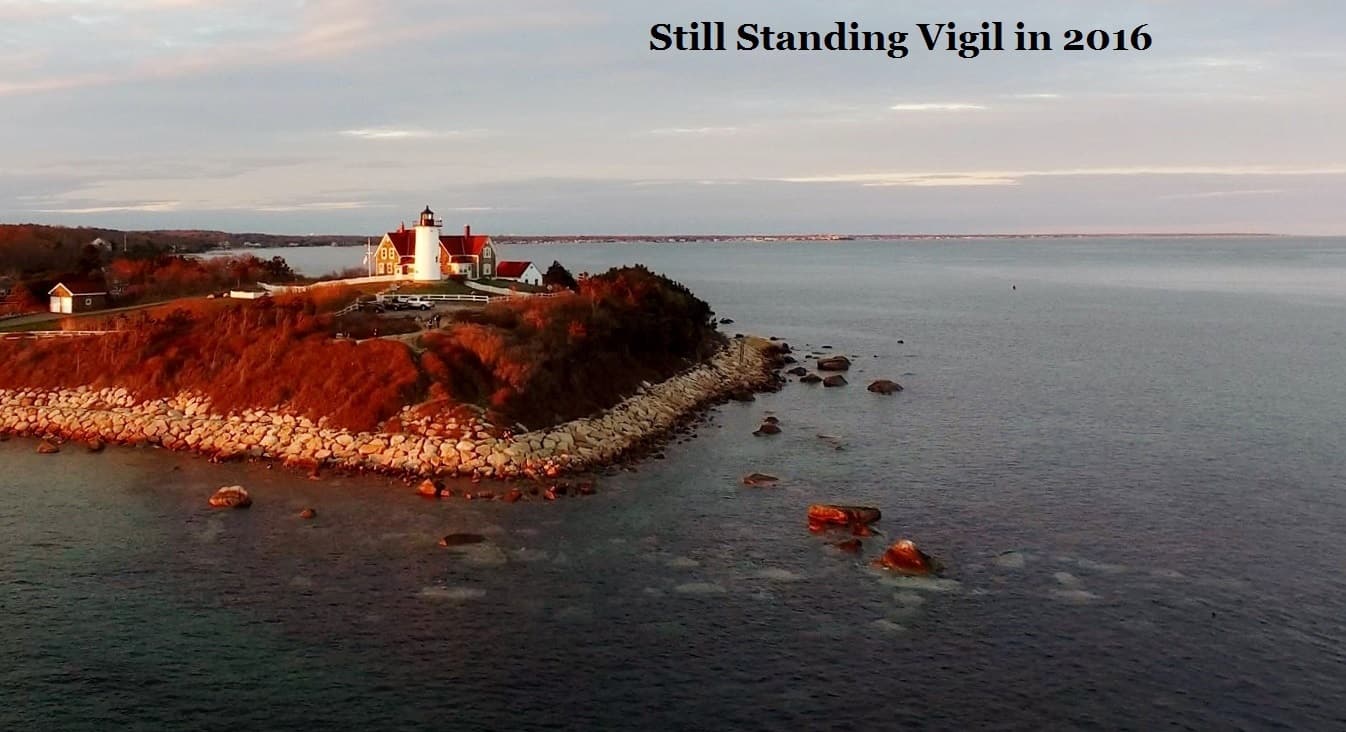