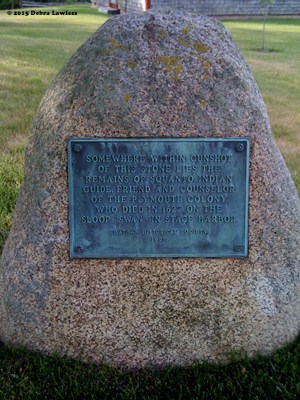 Where in the world is Squanto?

Out in front of the Nickerson Family Association’s grounds at 1107 Orleans Road is a 1955 plaque that you might have been wondering about. It says Squanto was buried “somewhere within gunshot of this stone.”

What is this all about?

Squanto, also known as Tisquantum was, of course, the Pilgrims’ guide famous for his ability to speak English. A member of the Patuxet tribe, Squanto lived for five years in England, Spain and Newfoundland after he was taken captive near Plymouth in 1614. Back in Plymouth County during the Pilgrims’ first hard winter and spring, he taught the newcomers to catch eels and to grow corn by fertilizing the poor soil with herring. Even as he mediated the treacherous arena of Native American-Pilgrim relations he was thought to be hatching intrigues of his own, and the powerful Wampanoag sachem Massasoit came to hate him and, some speculate, killed him.

In November 1622 Squanto traveled with Gov. William Bradford from Plymouth to Chatham, then known as Monomoit, on a mission to trade with the Monomoyicks for eight hogsheads of corn and beans. Their sloop, the Swan, anchored in Pleasant Bay. The trip was a success but just before departure, Squanto fell ill, bleeding from the nose. He was placed in a Monomoyick’s hut or wetu. “On the sea night descended, cold, green, and gray with winter. Tisquantum buried his face in a deerskin cape and made no moan as the ‘Blood of Death’ seeped into the woven mat.” So Elizabeth Reynard, a resident of Chatham three hundred years later, poetically described Squanto’s final moments in her 1934 book The Narrow Land: Folk Chronicles of Old Cape Cod.

Now here’s the kicker: After he died, Squanto was buried immediately. But where? Theories abound. And by the way, although that plaque outside the NFA looks very authoritative, you should know that it was moved there just a few years back. Previously, the plaque and its stone were planted across town at the Atwood House Museum on Stage Harbor Road.

Our own Warren Sears Nickerson (1880-1966), who grew up in East Harwich and devoted quite a lot of time to researching native Americans in the area of Chatham and Harwich, placed Squanto’s death “at the Monomoyick head village where the Swan lay at anchor.” This would be somewhere near present-day Jackknife Cove, about half a mile from the NFA. About 150 years later– in 1770 or so—“an Indian skeleton was washed out of a hill between the Head of the Bay and Crow’s Pond.” Because this corpse was buried more in the manner of the Pilgrims than of the Monomoyicks, a theory rose that the bones were those of Squanto. In his short book The Bay– As I See It, Nickerson suggests Squanto’s body still lies under the golf course at Eastward Ho! Country Club, overlooking Pleasant Bay. It is intriguing to imagine the many golfers who tee up, unaware that a body lies beneath the pristine grass of the golf club!

And so the search for Squanto continues.