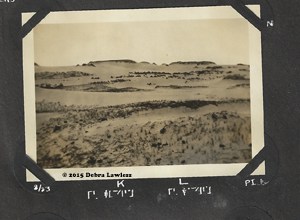 Can you decipher the Nickerson “secret code?”

The archives of the Nickerson Family Association, located in the William Emery Nickerson Archives in lower level of the Genealogy Center, hold many intriguing documents and artifacts that may some day, with further research, yield up their secrets.

We have paper documents such as late 18th century notes written by a ship’s captain on such mundane topics as what food items he brought on shipboard, Ensign Leon Edgar Nickerson’s WWI draft registration, and a set of turn-of-the-19th-century photos of the descendants of Joshua Nickerson and Susan Spear.

Some intriguing objects held by the NFA include chunks of brick thought to be from William and Anne Nickerson’s 17th century homestead behind the NFA, a Civil War sword carried by a Nickerson, and several Bibles with family births, marriages and deaths carefully documented.

And then there’s Frank Nickerson Houghton’s mysterious 1920s photo album which his granddaughter Naomi Jackson donated to the NFA in 2002.

“You will note that in some sections my grandfather used a secret code,” NFA member Jackson writes about the captions in her grandfather’s photo album. “I believe [the code is] of his own devising. He was a language buff.”

While early photos are clearly labeled, the “secret code” begins on page 15. At a glance, some of it resembles Braille– a series of sequential dots on three levels. On page “16b” is the first example of cryptic characters that bring to mind chopsticks and Cyrillic letters arranged in various sequences.

Houghton created his photo album, which runs from 1921 to 1928, when he was in his 20s. While much work needs to be done to decipher them, one of Houghton’s codes may, in fact, be Braille. And the second, “chopsticks” code, resembles another system created in the 1880s for the vision-impaired called Lunar type.

Yet even if the codes were devised by Houghton and never give up their secrets, the album remains a testament to one Nickerson family’s magical days in Chatham during the 1920s– one of many gems now being catalogued in the NFA Archives.

Old diaries, water-stained ship’s logs, dusty papers, love letters, ledgers, family Bibles, probate documents, military records, genealogies, photograph albums, even grocery lists and plumber’s bills from 1920—items from the exalted to the mundane, they all tell a story, and who isn’t intrigued by them? We certainly are! Do you have any of these items in your attics or filing cabinets? We’d love to add them to our growing Nickerson collection.

If you’d like to donate papers, photographs, objects or Nickerson memorabilia to the NFA, please email us at wmnick1107@gmail.com or leave a telephone message at the Nickerson House at 508-945-6086.