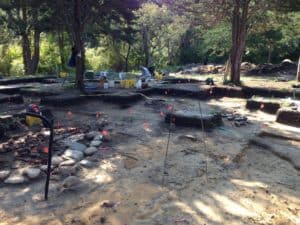 The Nickerson Family Association, Inc. will celebrate Massachusetts Archaeology Month with tours, a brief talk and refreshments at its 17thcentury archaeological dig site on Fri., Oct. 12 from 2 to 3 p.m.

Everyone is invited to visit the site of the c. 1664 homestead of William and Anne (Busby) Nickerson that has been under excavation since July 30. Archaeologist Craig Chartier of the Plymouth Archaeological Rediscovery Project is calling the Nickerson site “one of the best preserved, most informative 17thcentury sites in New England, especially on Cape Cod.”

The site had a relatively short occupation (20 or 30 years) by a small number of people. This means that each of the artifacts found is associated with everyday life at the time that William and Anne lived there.

The Nickerson Family Association, Inc., which is sponsoring the dig, extended the excavation by one month as the homestead is much larger than it was at first thought to be. The dig is financed by a $48,000 Community Preservation grant approved by Chatham voters in May and through donations from NFA members. The dig site lies on land owned by the Chatham Conservation Foundation, Inc.

Significant finds include a bed warmer; the fragment of a sharpening wheel, a unique find in New England; a partial Jesuit ring which would have been used to trade with the Native Americans; a brass button; a Trefid spoon handle; an intact spoon; an intact tobacco pipe; a round knife; loads of Sgraffito pottery; an octagonal silver cufflink with the initial “R” and a “bale seal fragment” which would have been used when shipping items from England.

One exciting find is traces of postholes that formed a palisade or wooden wall up to eight feet high. The Nickerson home may have been fortified during King Philip’s War (1675-78).

The NFA is located at 1107 Orleans Road, North Chatham. The event will be held weather-permitting.